Why Are Companies Using Improv To Improve Communication? 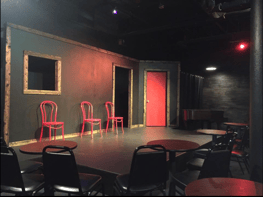 Communication on a personal level can be just as difficult to excel as communication on an organizational level. Funneling the static mess of thoughts in your head through multiple filters, aiming for a succinct meaningful message and the right body language, all while trying to make it pitch perfect can be like aiming for a moving dartboard...blind folded. For some time, I’d become frustrated at how exhausting it was for me.

So, I signed up for a beginners’ improv class at The Black Box Improv Theater. This eight-week course terrified me. I pepped-talked my way into class each week, dragging my feet every minute. Why? It was 3 hours of vulnerability and being ten steps outside my comfort zone. Speaking in front of my classmates with no script and no guideline immediately shut my brain down.

But, very slowly I began to feel less anxious after each class. Instead of hearing my pulse pounding while on stage, I was able to actually hear my partner’s lines. I even got to a point where instead of feeling a paralyzing fear, I was picking up invaluable tips on how to truly improve my communication skills.

I began to think of how essential these tips could be for not just myself, but for people of all levels of communication skill in a professional setting. If we can’t communicate effectively individually, how are organizations supposed to even come close? I knew Black Box had begun working with businesses so, curious about how this was going, I reached out to Justin Howard, the owner of Black Box.

During this past year, Justin has further developed the consulting side of his improv business, Emerge Improv. Emerge Improv helps organizations train their employees to become “authentic communicators” by focusing on active listening, adaptive thinking and building confidence, among other things.

Here's a look at our recent conversation:

The Black Box was one of the first improv theaters in Dayton. What was it like to bring this new medium of entertainment into a city where few people had even heard of improv?
In the first year, I could tell you the names of the people in the audience. It was people that I either invited or persuaded to show up. A lot of friends, family, co-workers.

What was the turning point?
It was a combination of all the times I felt the false sense of “this thing is really taking off.” I didn’t have a sense of when my ‘season’ was. In Dayton, you learn that between November and April, you hate Dayton. People get cabin fever. So, in February of 2013 I thought we were ramping up to take off, when actually that was our season. So that false sense of success got me to quit my job while I was still treating that pink shut-off notice from DPL like the first time I got my bill. It was a huge risk, but going all in was really the turning point for me.

Why did you decide to bring improv to Dayton businesses?
I had done a few things for businesses – owners would come to a show and ask me to do things for their employees. Then, after a 6-hour session with Harvard MBA students, I got a standing O. These students were from all over the world. Then when I came home, someone that works theater wrote an article about the session that got published in the Dayton Business Journal. That was when the word really started to spread through businesses, and I started to really sense the demand for it.

So, I’ve learned that improv isn’t just about being funny. It’s about reacting – being focused and present in the moment at a high level. In the workplace, what are some common barriers that you’ve noticed that prevents people from getting to that level?
Listening – do you see a pattern of people that are better at listening than others? Viola Spolin said something like “There’s no such thing as talent, but your capacity to experience.” People who are better listeners have a willingness to experience. But barriers are caused by fear and anxiety.

When I took the improv class, for me it felt like I was retraining my brain. If someone wants to truly use improvisation in their lives to be better listeners and communicators, how long do they need to ‘practice’?
72 hours of improv class, being on stage weekly for 30 minutes for a year. It really comes down to how much you practice – you can essentially practice improv all day.

As you’ve been working with companies, you’ve probably seen where your training has really taken off and other times when it’s been more or less a checked box. For the companies that have really taken off with it, what are some things they’ve enforced or encouraged to make that happen?
Not a lot of companies “check boxes” when taking on improv, but it’s hard for companies to maintain a focus on making improv successful because they’re putting out internal fires so often. Companies that are able to prioritize it are the ones that take off – the ones that want to make an impact on a more individual level – because everyone has a level of anxiety, so this type of training can be pretty personal.

As the trainer, what is a common point of frustration you have when working with businesses and their employees?
Time and money – nobody has the time and/or money to allocate to the results that they want. The hardest thing to deal with is seeing how deeply rooted anxiety is for people – you have to be so vulnerable in improv. Having “destructive heroes” is not an option.

I know there isn’t really a dollar amount, or an ROI, that you can point to when pitching improv to a company. But what is something you’ve often said that has made owners/execs go “a ha!”?
In general I can easily say that communication in any company is not effective – but the real selling point is go to an improv show. Poor communication and team dysfunction are so relevant, it’s easy to talk specifically to those points.

Feel free to reach out if you have specific questions with regards to this blog.

On any given morning, you will see me walking into the office with 3 drinks. My morning 'green...
Read More

Inflation Reduction Act of 2022: Programs That Could Impact You

3 Things I Learned From My First Busy Season

WE MISS BUSY SEASON! Don't you? Colleen is a Staff Accountant here at Brixey & Meyer and she...
Read More